Getting a little hot in there.

Getting a little hot in there.

Well, the name’s Roland Allen and I ran into a bit of a problem. Last night I noticed all the fans in a system I recently threw together were running at max RPM (Spinning as fast as they can). I thought nothing of it since I ran a couple of virus and system checks on it. The next day, I came home from work and booted up the system in question and right as windows began to load, the fans maxed out, yet again. I pulled up Speed Fan 4.41 (An excellent piece of freeware) and was truly shocked at what I saw. 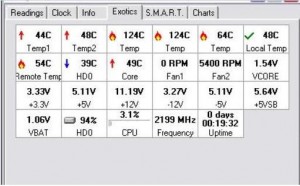 The first thing I thought was “Virus”. So I pulled up my task manager  (Ctrl-Alt-Del)  to see if any non-legit (or in a lot of cases legit) programs, under  the processes tab,  were eating up system resources they shouldn’t be. Nothing there beside the usual suspects such as Chrome and my antivirus. So,  I ran three  scans, one using Microsoft Security Essentials. The next with Malwarebytes, and the third with Avast. All came up clean. I was shocked with the results. 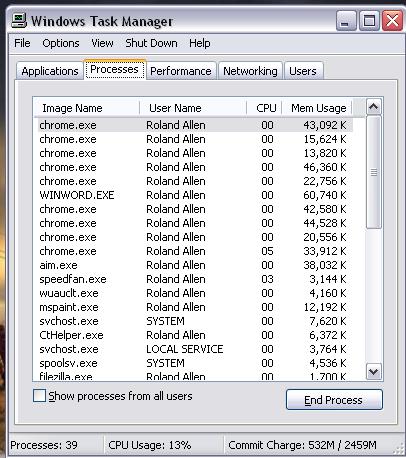 Next thing I thought? “What hardware was failing?” What do you do when this happens? The quick and dirty easy way is to pop the case open. Or, if you’re unsure of how to navigate the inards of your machine, bring it to a pro. With the case open,  look for unusualy hot components or fans making unusual noises or not spinning at all (and if you’re getting temp readings like mine, they should all be spinning). Besides the graphics card being very hot; which  is typical, computers do generate heat. It dawned on me. I have absolutely no room in my case and only four fans! ( two for the GPU, Case, and CPU). I was shocked, yet again.

Instead of getting a new computer case, and throwing on liquid cooling; hooked up to a  5’ radiator,  to everything in there, I just added more fans. I used what I had laying around the house. First one I found was a 3” Expansion Slot fan. Guess where that went? Right by the Video Card (GPU). Next I thought, I need cross ventilation. I dug around and found a massive (for what I needed it for) 5” case fan from a previous project.  GREAT! I thought. Not so much. This is a small case and I forgot about that. Then , it dawned on me…. 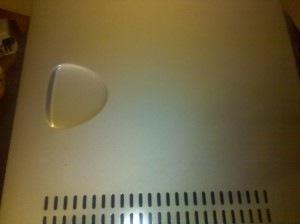 THE COVER!. What a perfect spot! Plenty of room and it would just be fun to do!

This is relatively easy to do. But I would put this at an 8 on the safe-t-meter due to the fact that you’ll be needing to use a dremel (or other metal cutting device) for this project.

The tools and supplies  you will need:

–          Patience, You don’t want to rush through this for many reasons, the biggest being safety. 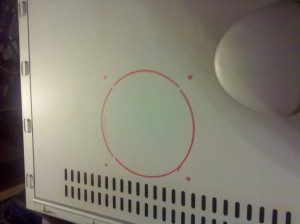 First you want to find the right place for the fan. Keep in mind you don’t want two fans blowing directly on each other, this may cause problems. Also, you want to keep in mind the room you will need for the fan itself. (Do take the time to do this, This is a one time deal. You can trace your lines, make your cuts, mount the fan, go to put the cover on, and BAM, the hard drive is in the way. The cover would be trash in this instance and you’d probably need a new case).

Then you want to trace an outline. The fan I was using has a grill, which I decided to use to mount the fan. Also to trace the outline with. 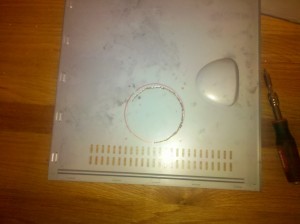 Second? Start cutting. I’m not one on explaining how to cut metal over the internet. I’m more of a hands on guy. So, if you’re not 100% sure on how to do this, I would suggest emailing me and I can try my hardest to explain in words or go to your local hardware store and they can show you (anyone will do really). Or hire a pro/”hard modder”.

Third, Cut the holes for the screws. Easy enough.

Fourth, Line  everything up, and screw/bolt together. 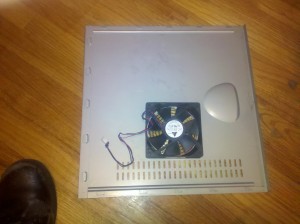 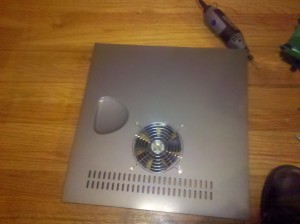 Finally? Plug ‘er in, close er’ up and start the baby up. 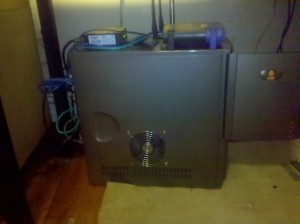 The end result? A much, much cooler, albeit slightly louder yet happier computer. 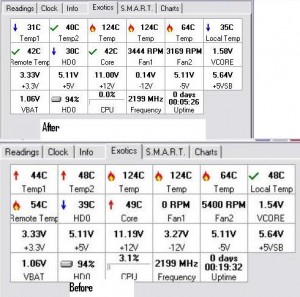 Now I know I did a quick and dirty job on the cutting and the such. This was a quick job for me. To do it right I would have ground down the edges to a slight bevel and used tape to cut the screw holes, but I didn’t want to take the time for a part of the case I wouldn’t actually see. For me it was for practical purposes only, not for looks.

The easiest way to overcome the loudness of the fan would be to find a more quiet fan. They do make them but they are up there on price.

One more option now would be for some crazy lighting!

I do plan on making a video of this, start to finish in the coming weeks so look out for that.

Roland Allen writes about a wide range of technology and products. He has been in the technology field for 10 years and recently started his own Company; Ghost Softworks. If you have any questions or concerns about any of his articles, feel free to contact Roland

May 2022 // Please call upon arrival for any drop off repairs. M-F 12PM - 6PM // Some repairs and part delivery is delayed at this time. Demand is meeting supply. We're getting to everyone as fast as possible. Dismiss