Future of the phone.

Future of the phone.

Voice Over Internet Protocol (or simply, VoIP)  has taken over where traditional landlines left off, leaving us with tons of options to choose from. Big names such as Comcast/Xfinity, Vonage, Verizon FiOS and the such, having different price plans and tiered packages left us in a similar boat we were in with MCI, Bell and AT&T.  There are two companies around that have caught mine, and many others attention though: Ooma and Magic Jack. Ben from Logistics CT recently did a short review on the Ooma option, also with a how-to guide on configuring it. So I thought I would write a review on my experience with Magic Jack. 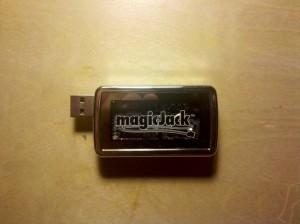 My first impression of this device was that I was very skeptical at best. With all the recent ads and infomercials about it and its vague website, I thought to myself this had to be some spyware gimmick. After some time of reading reviews and researching my options for what i would need a phone line for. I decided to give Magic Jack a try.

I bought one at CVS for around $40. The device itself is $20, then another $20 for a years worth of service. The package included the Magic Jack and a 3” Dongle. The dongle is a great idea. The Magic Jack takes up a lot of real estate and without it, it would easily take up the use of any usb ports around it.

Set up was easy and effortless. Just plug it in and let the Jacks Magic take over. You are initially greeted with a graphic version of the little device while it does a quick update and loads. 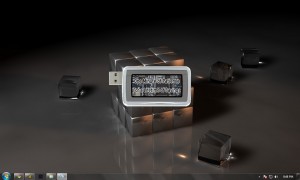 After that you’re asked to enter some information about yourself. Such as your full name, address, email, and an alternate phone number. Most of this information is used for E911 purposes so I wasn’t to worried about it. The next part of the set up was your phone number. This is where it stumbled. The closest number I could get was 70 miles away. Albeit the same state, yet different area code. This can be fixed with a free Google Voice account though.

Then you’re brought to a control panel with a contact/recent call list, dial pad and a Magic Jack ad window. The ads are truly that of Magic Jacks 3 year plan and international rates. Or in my case, to let you know your service has expired. 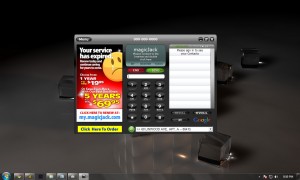 You can use your spiffy new Magic Jack several ways. One is simply as a PC client. All you need is a headset and a mic. Which is great if you’re on the road or you have a netbook. Another way is to plug a phone into the jack itself. The latter option is what I went with which worked great. The best “home phone replacement” option would be to plug the jack into a back-fed phone jack. This option would allow all your phone jacks in your house, corded or cordless, to work seamlessly with the Magic Jack. Also, if you’re an international traveler or a student abroad you can take this anywhere and your family would have a local number to call you no matter where you are in the world.

As far as call quality goes it’s great. Not as good as a traditional land-line though. At times there is some noise on my end, and other times the person on the other end seems to be miles away from the mic. However, this is something I experienced with other VoIP providers. Also there seemed to be some latency between dialing numbers from my cordless headset. Which leads me to believe this is very host computer dependant and may not work well on older machines.
The only true down side in my opinion would be  that the host computer needs to be on as long as you want phone service. So if you plan on making this your only phone line, plan on having your computer on 24/7.

To wrap up, for as many cons as this device may have, I feel there as many pros to balance it out. I personally wouldn’t use this device as a phone line replacement. For me it was useful for work related tasks such as conference calls and the such. This would work great as a second line or for the travelers who would like to keep in touch with their family on the go.

Roland Allen writes about a wide range of technology and products. He has been in the technology field for 10 years and recently started his own Company; Ghost Softworks. If you have any questions or concerns about any of his articles, feel free to contact Roland

Dec 2022 // Please call upon arrival for any drop off repairs. M-F 12PM - 6PM // Some repairs and part delivery is delayed at this time. Demand is meeting our supply. We're getting to everyone as fast as possible. Dismiss