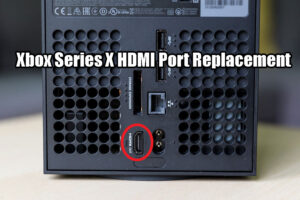 We hear quite often from our customers that this is the first time they have broken the HDMI port on any XBOX that they have owned. Over the years we have done many XBOX HDMI port repairs but with the launch of the new XBOX Series X there seems to be a significant influx of requests for this repair. In most cases it is the one of the HDMI ends that snaps off when pulling out the HDMI cord at a slight angle. This is mainly due to cheap parts and poor design from the manufacturer.

HOW DID I BREAK MY HDMI PORT?

Besides just normal wear and tear the most common way the port breaks is if you are constantly plugging and unplugging the HDMI cord from the XBOX Series X while moving from room to room or if you travel with it often. The damage can also happen if the console falls while still plugged in and there is impact where the HDMI port and HDMI cable meet.  If you use too much force when plugging in your HDMI cable you can break your port as well.

HOW DO I KNOW IF MY HDMI PORT IS BROKEN?

Before immediately assuming your port is broken there are a few things you can troubleshoot to help narrow down the issue.

If you have tried all of the suggestions above and your XBOX Series X is still not displaying, chances are your HDMI port is broken.

Inspect the HDMI port. Does it appear damaged? Do the pins appear bent or broken? When plugged in does the HDMI cable seem loose if you wiggle it? Not all damage is visible to the naked eye, sometimes the damage is behind the port itself where the port sits onto the PCB of the Xbox. 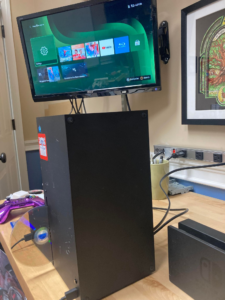 CAN YOU FIX MY BROKEN XBOX HDMI PORT?

YES!!!!! Even though this repair requires a complete teardown of the unit to repair it is nothing we can’t handle. XBOX Series X HDMI port repair is by far the most than past XBOX models and other consoles in general.  This repair requires a complete teardown of the unit. There are multiple layers of boards and the HDMI port is a bit more tough than other consoles to remove. However, it is nothing we cannot handle. We will remove the faulty port and solder a new HDMI port onto the board. We use only high-end, better than factory HDMI parts along with stronger solder to keep the port in place.

If you are interested in having us repair your XBOX Series X click here to visit our shop and add the HDMI service to your cart. Get all the details on what you need to do and where to ship it from the above link. If you live locally in Connecticut you can drop it off at our office during our posted business hours. We will get your XBox up running in now time at all.  You can continue playing your favorite XBox Series X game like Halo Infinite or Forza Horizon 5 with very little down time.

Visit our instagram to see past XBOX S Series HDMI repairs and other console jobs we have done. 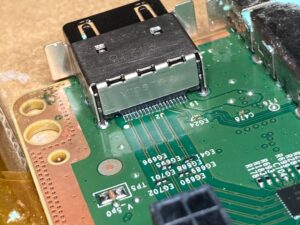 SOMETIMES IT’S NOT JUST THE PORT

Depending how the port sustained damaged there can be other physical damage to the board itself. Obviously we are unable to know if there is additional damage until we inspect the board under our microscopes.  If we do come across other issues it is not the end of the world. We will take pictures of the damage and let you know what it will cost to do the additional work.

Electrical Damage is another form of damage we have seen with XBOX  consoles. Specifically a failed HDMI retimer chip. We can perform this repair but will need to assess the unit first before assuming the unit isn’t displaying due to a faulty retimer chip.

Jan 2023 // Please call upon arrival for any drop off repairs. M-F 12PM - 6PM // Some repairs and part delivery is delayed at this time. Demand is meeting our supply. We're getting to everyone as fast as possible. Dismiss